Not really a strip today, but the new cover for the upcoming spanish edition of the Vault. Thanks to the will of Andres Palomino, creator the of cronica PSN and formerly unofficial translator of the Vault in spanish, Diabolo ediciones will publish the first volume of the UVod, fully translated, under a brand new cover. Book is currently finalised by Nacho Casanova under supervision of Lorenzo Pascual at Diabolo. 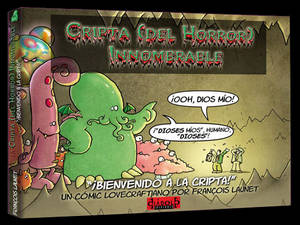